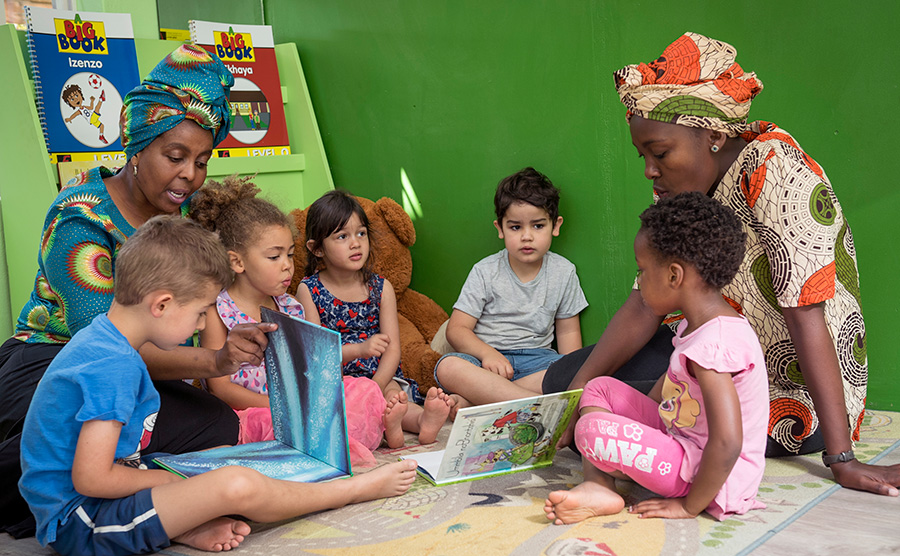 We are often asked why our ZuluMites teachers only speak Zulu to the children. Through both extensive research, and based on our own experience, we know that a complete immersion in the target language to be the most effective way to learn language for the following reasons:

ZuluMites is focused on developing functional language ability. We believe that children will only use the language if they develop an identity and a sense of ownership of the language. We do not see any value in the rote learning of vocabulary that has no context, and cannot be used by the child. By speaking only in Zulu, the child is exposed to vocabulary in its correct context; as part of a full Zulu sentence. This enables the child to grasp the rhythm, tone and pitch of the language in context.

Obviously our sentences are modified to slow, simplified speech, combined with actions and visual cues in the early stages of learning (much like someone would acquire their first language). There is also much repetition of these sentences across contexts, so children get familiar with sentence structure and are sensitive to the minor changes as they happen: i.e. “I jump, you jump, we jump” “I sit, you sit, we sit” Throughout our programme, they are seeing real life settings in which they can use their Zulu ability and grow in speaking confidence (because they have to) instead of simply learning a list of words for no reason, or learning grammar structures of sentences they cannot yet construct themselves.

A child’s brain is more than capable of making language associations and meaning from a complete immersion environment, and we do our children a disservice thinking that they need everything to be explained to them, or that they cannot function in the world unless they understand everything around them. This is certainly not the case when children learn their first language, nor is it true when acquiring second and third languages. When we give space for children to connect songs to words, and for their brains to work things out for themselves, we ensure they will both use and remember the vocabulary in the future.

ZuluMites uses songs, games, actions, pictures, visual objects, repetition and routine to ensure that all the scaffolding is in place for connections to be made in a child’s brain and for them to recall and remember useful vocabulary. You do not need to explain that “Ngi” means “I” in a sentence, because when you point to yourself and say “Ngi” – this is adequate association for a child’s brain to make the connection for itself.

Although learning a new language is mentally taxing, and none of us like the feeling of discomfort or being lost, it is a vital step towards inherent motivation (ask anyone who has ever travelled to a foreign country and needed to buy their own dinner). In order to progress, a season of not being able to understand or communicate effectively must be endured. This uncomfortable state is where real learning takes place – when the child is forced to draw deeply on what they know, to look for clues, and to make educated assumptions about what is being said. This is a very good skill, not just for language learning but for general mental and cognitive development.

Dominance of Zulu language and Culture

It is natural for the English children to want to speak English to their teacher and to each other, as this is the language they are most comfortable in and takes the least amount of effort. But by allowing English to take precedence in the Zulu classroom, we are perpetuating the idea that English is the more dominant language in any setting.

We believe that it is the role of the Zulu teacher to push back on that dominance and promote the learning of his/her language as equally valuable and necessary for the students. By using English in the classroom, we inforce the belief that Zulu is of no great importance or use, and is merely a subject of academic interest – because Zulu people will speak to you in English anyway.

Only by speaking Zulu in the class can the children be convinced that the language is of value, both culturally and functionally, and should therefore be respected, and an effort made to attain it.

By creating a Zulu-only environment, and discouraging the use of English, children are forced to struggle through the process of communicating in the target language which is a key step in developing functional ability. Without this necessity, a child is simply unmotivated to learn the language. The brain is highly efficient, and will not retain information it does not have to (a prime example of this would be the fact that people no longer remember cell phone numbers from memory, because our brains know that we are seldom without our cell phones and our contacts).

By creating a “forced necessity” we are communicating to our brains to stay engaged in the class, retain information, manipulate it accordingly and respond appropriately. This kind of necessity does not come from an English speaking environment, and instead must be deliberately constructed by the Zulu teacher. This will mean that communication is mostly ‘one-way’ (teacher to child) in the early stages, but through persistence the child will developsuperior language ability compared to those taught using English, as research suggests. One of the main reasons that South African schools have been unsuccessful in teaching children to speak Zulu is because they are using English to teach it, and not providing this necessity to speak.

Time in the language

Another reason why children are not acquiring Zulu (or any other) language is that there is not sufficient time exposed to that language. Research supports that children require enough exposure to a language before they can become proficient to a certain level; but if we are using our class time with a dedicated Zulu speaker to explain things in English, we are dwindling our already slim exposure to Zulu down even further. If in a 30 min lesson, a child actually hears 30 min of only isiZulu, they will acquire the language much faster and with more competence than a child who, in a 30 min Zulu lesson, only hears 10 words of Zulu amongst predominantly English sentences.

The ZuluMites methodology is radically different to the Zulu teaching happening in most schools in South Africa today, because it is results-driven.

Our Zulu-only teaching environment is our significant value-add, going against the traditional way of teaching second languages that has been ineffective over the years. We can assure parents, that while our approach is so different, it is coupled with fun and energy, delivered by specially trained Zulu teachers, who take pride in their language and culture and pass that passion onto their students.

When it comes to language, ZuluMites is based on the philosophy that language is part of life and cannot be taught in isolation. By combining language learning with an activity, it is both more memorable and more fun! By giving children a reason to speak the language and an environment where they can use it is, we believe, the best classroom model for teaching language. We make learning isiZulu accessible, fun and practical, with a focus on younger learners. Our methodology leverages high teacher to student ratio, native speakers, a full immersion environment, and a practical activities-based curriculum that we have developed ourselves.

Should you have any further questions about our methodology, please do not hesitate to be in touch.